Saturday 26th The final count down.

Great snow at Whistlebinkies love it to bits. On the last Saturday it possible to feel the energy draining away but my acts were on fire. Dylan Dodds was superb and its such a shame his phone was broken and he couldn't film it. I'm testament to the fact it was great.
I've also enjoyed Michael Hughs and his oneliners/flip chart act. Doing Fringe gigs with under ten gigs experience is brave but he's got big laughs. Notethat I did my 2nd and 3rd ever gigs atthe Fringe and enjoy passing onthe opportunity when deserved. His is as was Lucia's earlier in the run.
Together we were light and fluffy and fun and just the show I aim to put on.

Quillarious went well with a very close finish. Jo who'd been so creative throughout was great then Carol get up and works the mic like a pro act. Go Glasgow girls!

No shows tonight as I need the energy for tomorrow. Helen cooked an amazing lasagne and the wine flowed. We were even joined by her Airbnbers from Germany. 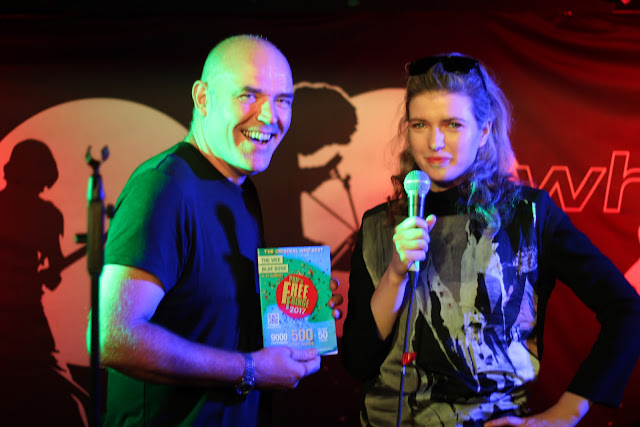 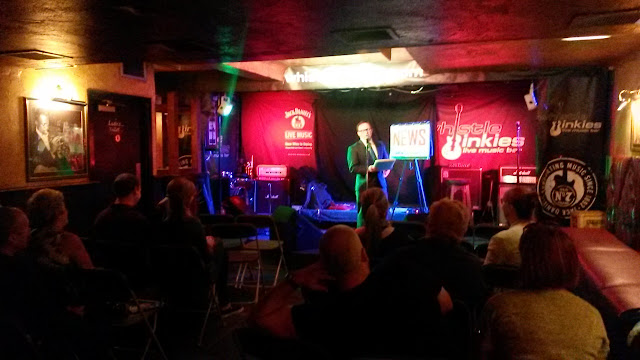 Posted by Alastair Sadler at 07:30 No comments:

Now Fliss is here its harder to keep up with the blog. A price well worth paying :-)

Whistlebinkies went well but I can't remember any specifics! If only I'd kept a blog about it!

One of of the best Quillarious ever.
It came together so well. This show leaves me feeling light and fluffy and full of hope that I'm really onto something.
Youtube : #Quillarious 2017-08-25

First we saw Christian Reilly who we see every year. It fun cleaver musical comedy. I even heard a Radio Four documentary about his fringe experience,  but sadly in my opinion he's drifted to a blunter, coarser less clever set for this Fringe. Donald Trumps a C$#t over and over. Got it the first time! About six walked out during the show.
I'm never comfortable criticising a comedian but I have to as honest to the blog as I would  e if I was face to face with you. If it were to get back the Christian then it's  nothing I wouldn't say to his face. I'll see him again next year and hope he's back on form.

Next was Damien Kingsley's one man show Can't Dance Won't Dance.
I've known Damien since my early open mic days. He delivers solid punchlines in a passive aggressive manner. I found the show didn't quiet offer the twists and turns of narrative I'd expected. Some nice audience interactions and interactions with a videoed character worked well, but the big let down of the show was the room. When the access to the only ladies toilet of the pub is through the room the shows in! It's amazing the show takes place at all. Queue hand dryer and either noisy drunk girls or embarrassed sober ones. Not an ideal venue.

I'd received a message from Steve McLean that he'd hurt his ankle and could I mc his late show Anarchy Cabaret. Nay probs pal. About 30 in with one act down. We did a great start and the first 40 mins went very well but I couldn't quite get behind their masks. It’s  as if they're volume control is stuck at 3 and I felt the show slipping away. Most were young and tired and I didn't have the right material to connect. It wont be the worst show they've seen and it wont be their best. That's  both annoying and inspiringly challenging. Thinking cap on!

Thursday 24th What a Day

Surprise at Whistlebinkies as Nigel and Zac Day join Fliss so I've got my home team in da house.
A really nice show. I know I've been saying that a lot but considering the numbers are down the shows have been better, more fun and very satisfying from my mc'ing development.

Apparently  it was beer o'clock so a very pleasant chat with Nigel, Zac and Fliss. Zac has transitioned from the student I met at my Mambalsa show two years ago, to a man who's a pleasure to blether with.

Quillarious was fun with Nigel performing his first stand up!
#Quillarious 2017-08-24

In the evening Fliss and I went to see Sarah Pasco who was seamless and funny and fluffy and everything you'd expect from a top act. It’s great seeing the roll in roll out operation at the Pleasance. Queue for drinks, queue for seat, queue to exit, queue for toilet, and when alls done you can just hang around in a queue just for fun. They do have to keep a close eye as it's  very likely that a queue can loop around upon itself forming an infinite queue. Once stuck in this there's no way out!

I was due to to perform at Drunken Heckle a late night show where the audience heckle but no audience so no show :-(

Posted by Alastair Sadler at 01:43 No comments:

Whistlebinkies slowly recovering numbers, with the consensus being this has been a quieter fringe. My guess is incomes have been frozen for longer than a Game Of Throwns plot line, which turns a four day break to a weekend break. Apps are ubiquitous so people are phonbie-ing around (yes phonbie i.e. phone zombie is in the OED) This means a schedule and a less chance of taking a chance. I have to take responsibility for my lack of flyering. Having wasted £200 on flyering the first week, I've allowed myself to avoid it. Bad me, slap wrist and time f 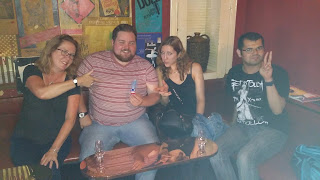 or a wee chat with myself!

Fliss arrived at lunchtime and came to Quillarious. Not a bad show, small but excellent content from Ali aka Alistair, which I've put in to confuse everyone who spells my name wrong!


Posted by Alastair Sadler at 06:58 No comments:

Not quiet as quiet at Whistlebinkies but it's the traditional low before the final few days.
Looking forward to Fliss coming up tomorrow.

Quillarious was challenging. Mainly student who didn't know each other. On a scale of 1-5 they didn't allow themselves to go beyond 1. Energy, enthusiasm.  They participated but just. Except at the end when a took a photo. Suddenly generation selfie jumped into a  "were having the time of our lives" pose.
Now that sounds like I'm blaming the audience but it's my job to get into the heads of the crowd regardless and I failed. Maybe it was never going to happen but thinking cap on. 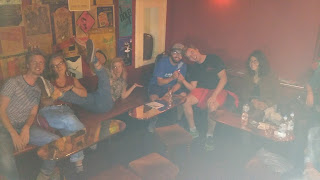 Posted by Alastair Sadler at 06:42 No comments:

Mon 21th Where did everyone go?

Super quiet day. Its as if everyone got burnt out at the weekend and are sleeping it off today. Whistlebinkies very quiet but the acts were so professional it blue me away. Team Fringe does it again.

Quillarious would have had no one but Zara who was on earlier did the show so I can say it's worked with one person :-) We had a very useful brain  storming session after that generated some good ideas.

The quiet days aren't having the same demoralising effect they did two years ago. They are just sign posts to improvements. It may also be because the shows are good. Which means its marketing  or weather.

So tired but stopped off at a potential salsa venue which turned out to be nice.
TV and sleep :-)

Posted by Alastair Sadler at 06:39 No comments:

Busy at Whistlebinkies again :-)
Lovely to see Katie Lane up at the Fringe.
I was a little under parr 8/10 for me. It's as if I had a really late boozy night last night?
I did get up early and go to Lidle as I'm cooking dinner for Helen tonight.
No pressure there! 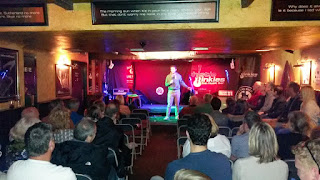 Quillarious went..... ok-ish! Six people in. Two ladies who are Airbnbing it at Helen's and Damon who was a Scottish lad who'd been on a bender since Friday. He'd got thrown out of a venue by the bouncers and smashed his forehead on the pavement.
It was wonderful to to give a point to him for completing his first sentence of the show.
Sadly I pressed pause instead of play and have no video of the day :-(

In early and cooked for Helen. Helen's an amazing cook and i felt more nervous than any show I've done.
FYI baked marrow filled with aubergine, coriander and lime,  topped with toasted almonds and caramelised onions, served with a potato yogurt and goats cheese salad.
It wasn't bad but the young rioja was pants!
Blethered until 1am so no early night fir me!


Posted by Alastair Sadler at 06:29 No comments:

Alastair Sadler
About Alastair Sadler: In 1995 I the fast ‘n fun Salsa Rapido® method. In 2003 I introduced the world’s first and most successful 1-Day Intensive course, which still runs every weekend in central London. Although I have taught across Europe and worked on many productions with the BBC. In addition to dance I enjoy performing stand up comedy and have taken five shows to the Edinburgh Fringe Festival. I’m also currently studying for a Diploma in Psychotherapy. Current projects include: Daytime Dance - a community Mambalsa dance project to tackle isolation in society. Salsa Rapido 1-Day Intensive Course WC1, The Thames Salsa Cruise.